1. A hypothesis that human memory operates on the principles of holography had been put forward by K. Pribram [1]. This hypothesis has been investigated, elaborated, and discussed in numerous publications [2,3,4,5]. As said in [5], without this idea “there had been a total absence of even the prospects of general theory of biological memory”.

The reason for the high regard of holography is that, apparently, it offers the only known method for distributed representation of information corresponding to the functionality of the brain. The two basic paradoxical facts about human memory are well interpreted by means of the properties of the holograms (see Fig. 1):

- Like a hologram, human memory, as observed in classical works of K. Lashley [6], does not keep information in a particular location; and in both cases, the entire information contents can be recovered from a piece of the whole structure.

- With holography it is possible to recognize partially matching patterns invariant to certain distortions; this provides the most important feature of human memory - associative access. 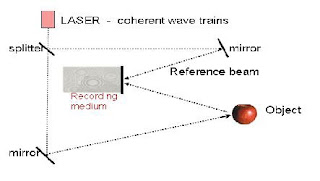 Fig. 1
The principle of holography – partial match recall
Light pulses from a laser are split into two beams: a reference beam going
straightly and a signal beam going through an object. The two beams meet at
the recording medium producing an interference pattern – a hologram. For
another object the same can be done with a reference beam at a different angle.
As the recording medium is irradiated by a signal beam from a part of an object
the corresponding reference beam, feasibly with lesser intensity, is recreated

2. In holography, the dimensionality of informational structures is determined by the restrictions on the wave propagation patterns. There are two basic types of wave propagation (Fig. 2): (a) waves can keep the whole medium behind agitated, for example, this happens on water surfaces; or, (b) waves can move with a sharp front leaving the media behind quiet, for example, this is the case for electromagnetic waves. The latter situation occurs in accordance with the so-called Huygens’ principle when the propagating front is created by secondary waves.

It has been noticed in [7] that holography can be effectively implemented only with the second type of wave propagation because for the first type of wave propagation the region of waves interference is extensive. It turns out that in a strict sense Huygens' principle is efficacious only in a 3D space [8]. As a result, a holographic model of human memory can directly manipulate only with 2D structures. Perception of 3D objects is done through temporal sequences of the 2D cross-sections. As to the objects of higher dimensions, their effectual representation in the holographic memory is not possible [7]. This implies that for the developed model the interface between the memory and the brain has to operate with 2D segments. 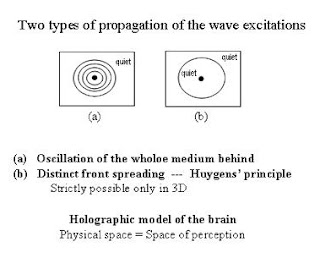 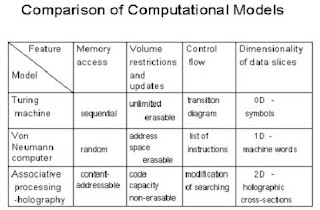 3. To begin with, a holographic mechanism needs a source of coherent waves to implement the scheme in
Fig. 1. Apparently, in conventional science a source of waves for holography is not at hand neither for the brain, nor for the cosmos. Importantly, in the words of Karl Pribram, “holography does not like boundaries”.

The fascination with holography has been also extended towards the Universe where the properties of holography are applied to rationalize the weirdness of quantum mechanics. To explicate the key point of non-locality David Bohm introduced a concept, which he called “implicate” or “enfolded” order; the holography is attracted just as analogy showing that the whole world can be enfolded in each of its parts [4].

Processing in neuronal system coordinates activities in different brain areas. Vision system produces 2D patterns; other senses mainly produce 1D sequences signals. Access to holographic memory is done by 2D patterns, so to enable access to the memory by 1D inputs it is necessary to have serial-to-parallel conversion providing 2D patterns. As a result, inputs from various senses can be accommodated and cross searches between them become possible.

The best that neuroscientists can say for the moment is that human memory is a stored pattern of connections between neurons in the brain. Each neuron makes about 5,000 to 10,000 synaptic connections with other neurons. Such a structure is not an effective computer engineering apparatus, but now Yasser Roudi and Peter Latham at University College London [10] have found that even with 10,000 connections per neuron, a network could only store about 100 memories – regardless of how many neurons were in the network. Current explanation of the brain attracts the Long-Term Potentiation to strengthen synaptic connections for the task of memory. However, switching times in neuron processing are about 10-2 sec and covalent modifications of proteins for LTP last minutes [11]. These time scales are absolutely incompatible with the speed of brain operations. As to other performance characteristics, notably, reliability and fault-tolerance, the pattern of connections between neurons cannot be even thought of to match human memory. Hence, workings of human brain tend to be attributed to perplexing quantum world or problematic non-Turing computations (see, e.g. [12]).

Information processing functions associated with human brain constitute a problem of acute discomfort to thinkers for millennia. Said St. Augustine, V century: “The way in which minds are attached to bodies is beyond man’s understanding”, Blaise Pascal, XVII century: “Man is to himself the most wonderful object in nature; for he cannot conceive what the body is, still less what the mind is, and least of all how a body should be united to a mind”, Steven Weinberg, XX century: “How memories are stored in the brain is not likely to be affected by the discovery of the final theory”.
The contemporaneous philosophical thought tacitly admits that the considered problem cannot be incorporated into the existing knowledge; see, e.g., an article in the encyclopedia [13]: “It may well be that the relation between mind and body is an ultimate, unique, and unanalyzable one. If so, philosophical wisdom would consist in giving up the attempt to understand the relation in terms of other more familiar ones and accepting it as the anomaly it is”.

We have suggested a paradigm analogous to the concept of “Cloud Computing” that gives
an elegant constructive solution to the problem of the organization of mind where individual brains are not stand-alone computers but collective users getting shared access to portions of the holographic memory of the Universe [14, 15, 16]. A critical consideration of such an idea can be found in [17]. With the existing worldview attaining the extraordinary performance of the brain is absolutely inconceivable.
References

14. S. Y. Berkovich, “On the “barcode” functionality of the DNA, or The phenomenon
of Life in the physical Universe”, Dorrance Publishing Co, Pittsburgh, PA, 2003
(almost a full version of this book is at http://arxiv.org/abs/physics/0111093)

16. Berkovich S. “On the information processing capabilities of the brain: shifting the
paradigm”, Nanobiology, 2, 1993, pp. 99-107
http://www.seas.gwu.edu/~berkov/Theory.htm

Posted by Simon Berkovich at 5:08 PM